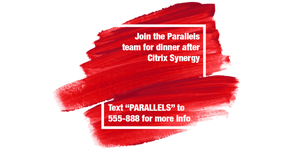 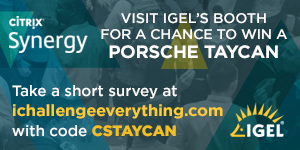 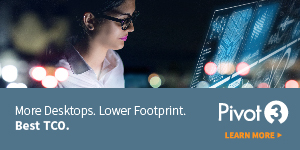 At Citrix Synergy, the Citrix annual user conference which took place last week at the Georgia World Congress Center in Atlanta, Citrix made several announcements over the course of the three day event.  But, the company aimed to make it quite clear that Citrix products should be an ideal option for all users, not just the power users or those in IT.  By the end of day one, it was also clear that Citrix was placing a major focus around the Citrix Workspace product.  If you haven’t seen it before, Workspace essentially provides an organized view of your available applications, documents, messaging, tasks and more; and provides users with secure access to their Web, SaaS, Windows, Linux and mobile apps.

While Workspace originally set out to solve the old problem of providing users with easy access to applications, fast forward, and that no longer seems to be the challenge.  That problem seems to have been solved.  Now, the challenge has shifted to users having too much access!

The average employee uses roughly a dozen apps to get the information they need to do their work effectively, and that implies a constant jumping around from one app to the next in order to get the job done -- which can greatly impair productivity and eat up valuable work time.  With so many application choices, each with overlapping functionality, to multi-step procedures, to overwhelming amounts of information, users end up spending a disproportionate amount of their day simply maintaining their communications and handling basic tasks.  As a result, there is little time left for them to do the productive, and typically more satisfying aspects of work.

In essence, we've solved one problem, but in turn, we've created another.

After listening to the keynote session and speaking with various Citrix executives over the course of the show, a theme quickly came to light that Citrix is shifting much of their focus from IT management to more of a holistic employee experience campaign.  And that's where Workspace intelligence comes into play.

IT is still the company's primary customer, but Citrix wants to provide them with the tools that they need to better serve their own internal customers -- the employees on the front line -- because if IT isn't careful and mindful of the end user, they could reach a certain tipping point of frustration with the environment within which they work.

"There's too many distractions with so many apps with which end users need to navigate on a regular basis," said Tim Minahan, chief marketing officer at Citrix, in an interview with VMblog.  "And there's so much time spent on non-value added tasks away from their core job.  With our digital workspace, what we're trying to do is remove the noise from the employee's day, giving IT the ability to be the hero in the story by presenting employees with a digital workspace that gives them everything they need to be productive in one unified experience."

Minahan added that it was important to first provide end users with single sign-on access to all of their applications and their content, whether SaaS apps, mobile apps, or virtual apps.  Second, to do so in a secure way.  He stated, "Applying dynamic security policies, because we understand the behavior of the user, how they log in and the like, without getting in the way of experience."  And third, which is super exciting with core, Minahan said, "the announcements at Synergy were about really infusing intelligence into that workspace.  So adding machine learning, simplified workflows, and micro apps will really change the workspace from the place where I go to launch apps, to a place where my day is curated for me and presented to me with the right insights and the right tasks, removing the noise and allowing the end user to get on with their core job."

Managing applications and actions isn't a new function for Citrix Workspace, but the integration of Sapho into the product is something new and improved.  Sapho, you might remember, was an acquisition Citrix made last year, for $200 million.  With it, Citrix has introduced what it calls its 'Micro Apps' capabilities to the product.

The new intelligent interface of Citrix Workspace provides something along the lines of a social media news feed that organizes a users critical tasks and let's them more easily see what they need to get done.  So as an example, if a user needs to work on, submit or approve an expense report, or create an IT help request or set a meeting, they can do so here with a single click or two.  Micro Apps can turn tedious, multi-step procedures into a much more simplistic and seamless process by eliminating the back and forth between applications.  The new cloud-native experience is set to arrive with connectors to 150 popular SaaS and mobile applications which include Microsoft Office 365, Salesforce, SAP Concur and Workday.

PJ Hough, chief product officer of Citrix, told VMblog that the new interface is designed to modernize the application consumption experience inside the digital workspace, adding, "We really are attempting to break down some of the very large enterprise complex applications, and build micro application experiences around them, making it much easier to complete those daily tasks that we all have to do.  And providing that to the user in a way that's very familiar."  Hough continued, "We chose the feed metaphor that's common from social and other applications.  And while it's a very different user paradigm, it's also a different way to interact with the rest of your organization in a way that I think helps people stay in context and get a lot more done."

The intelligent Workspace interface goes beyond UX changes.  Citrix has created a modern micro-services architecture that uses AI and machine learning to enable a digital workspace customized for the user with application logic that runs native.  Instead of launching applications from the desktop or mobile device, relevant features or action items from those applications will instead appear in the Workplace feed for much easier access.  This means fewer steps for the end user and the ability to quickly jump right into the thick of things.  AI will help guide the workflow of employees in a much more simplified and much smarter manner, and Workspace will be able to sift through all of the relevant apps and deliver insights straight to the end user.

Beyond the list of Micro Apps being provided by Citrix out of the box, the company said it will also offer a full API-driven tool that will allow partners and developers to build integration with custom applications.  The Micro App Builder will also provide a simple drag-and-drop, 'no code, low code' tool for those without programming skills to be able to construct their own micro apps that can be integrated into Workspace as well.

Security was another important component added.  As you move from place to place, or device to device, the system will understand the individual, and understand what devices they have, and the ways the user typically will access things.  It can apply a security policy, or add a second layer of authentication.  Or if the user is outside of the office, it can put additional security controls in place like shutting off the ability to print or download, or even apply enhanced security measures such as anti-keystroke logging and screen capture protection.

When talking about the new security features, Minahan told VMblog, "For us, the real goal that we put out there on the security front is that companies have the confidence that all of their applications and all their content are more secure within the workspace, then, in fact, natively."

Keep watch.  If the solution works as advertised, we could see a major shift in the way people work.  And hopefully see an increase in productivity as promised.

More in this category: « Carisa Stringer - Citrix Synergy 2019
back to top